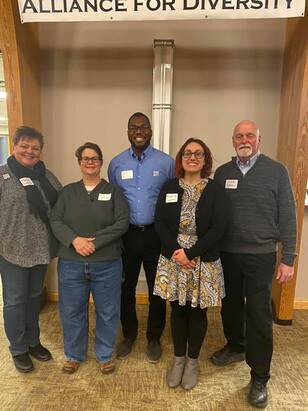 MLK Day Celebration January 20, 2020
Over 75 community members joined us for our annual multicultural pitch-in dessert in observance of Dr. Martin Luther King Jr. Day. Derrin Slack, founder and CPO of the nonprofit service organization ProAct Indy, was the keynote speaker, sharing his perspective on "Standing in the Gap" -"If the wall is current strategies in solving societal problems, then the gap demonstrates how many organizations – schools, churches, nonprofits, businesses, etc. – and these organizations’ people are siloed and oftentimes do not sustainably support each other in work that often overlaps to support vulnerable populations. We tend to invest in and offer interventions, rather than preventative and proactive approaches to break down the siloes that create gaps in people’s lives. We must stand in the gap for those vulnerable populations and heed to MLK’s advice to challenge systems and support those people who may not have a voice." 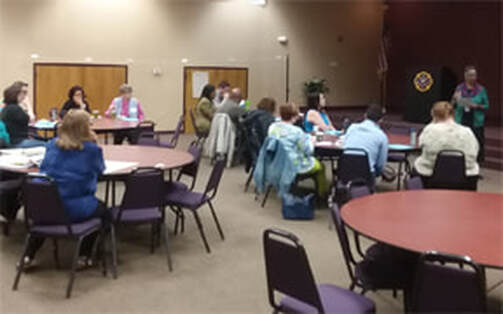 Community Conversations on Diversity: What is "Race"? April 28, 2018
On nearly every survey or government form, there is a question asking you to designate your race. But what is “race”? How long has it been used to differentiate people? Is it determined by biology or society? These and many more questions were addressed during this lively, interactive Community Conversation in which 23 people participated. 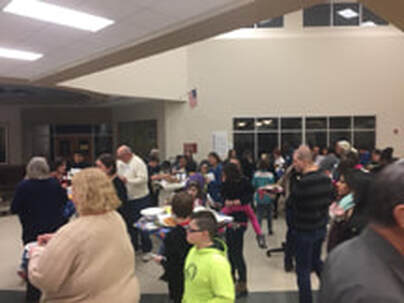 Dr. Martin Luther King Day Celebration and Multicultural Pitch-in Dessert​ January 2018
In spite of frigid temperatures and icy roads, 130 people identifying their heritage or origin from 10 different Indiana counties, 12 different states, and 6 countries other than the U.S. joined us at Avon High School. Delicious desserts from many cultures were enjoyed, followed by a keynote address by local community activist Dana Black. Plenty of time was allowed for mingling, and of course, for a second trip to the desserts! 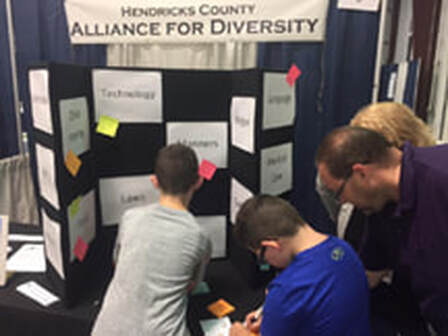 ​Hendricks County "Get INvolved" September 14, 2017
The Alliance for Diversity was represented at this annual interactive non-profit showcase, where we joined with other passionate community members who are looking for a place to give back. We learned about opportunities with local organizations seeking volunteers, board members, and partners, while sharing how other organizations and member of the public can get involved with the Alliance. This is a great event for the whole family! 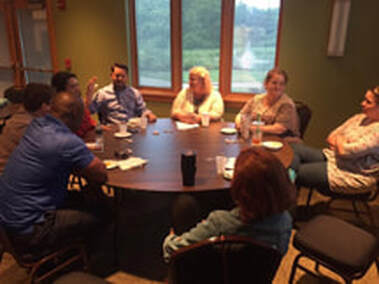 Community Conversation About Diversity July 11 & 12, 2017
​This was the first of what we are planning as an on-going series.  The subject of this Community Conversation was centered around the critically acclaimed documentary film, "Attucks: The School That Opened A City".  The film captures both the history and legacy of Crispus Attucks High School in Indianapolis, exploring the racist origins of a school that was designed to fail, and the inspiring tenacity of teachers and students who ultimately prevailed.  Parts 1 and 2 of the film were shown on July 11th, and parts 3 and 4 on July 12th.  Each was followed by facilitated discussion.
Dr. Martin Luther King, Jr. Day Multicultural Pitch-in Dinner January 2017
This year's Dr. Martin Luther King, Jr. Day Multicultural Pitch-in Dinner was co-sponsored by Macaroni Kid of Hendricks County, and hosted by Avon Christian Church. This year the flu was making its rounds in central Indiana which led to reduced attendance, but we still enjoyed the company of 160 people who identified their heritage or origin from 21 different Indiana counties, 21 different states, and 15 countries other than the U.S. After a few brief introductory remarks, plenty of time was allowed for people to mingle, get acquainted, and fill in their multicultural Bingo sheets!
70th Anniversary of Auschwitz Liberation Program April 30, 2016
In January of 2015, a group of people from throughout the U.S. and 3 foreign countries accompanied Holocaust survivor Eva Kor on a trip to Poland to take part in the 70th anniversary of the liberation of Auschwitz.  One of those travelers was Laura James-Reim.  In her presentation, she gave a brief background of Auschwitz and Birkenau, and showed photos of Krakow (the site of Oskar Schindler’s enamelware factory and where “Schindler's List” was filmed) and the forced labor concentration camp of Plaszow.  In addition to talking about the trip, she also talked about Auschwitz survivor Eva Kor and the CANDLES Museum that Eva founded in Terre Haute, Indiana.  This was a powerful presentation about a trip that can only be described as a life-altering experience. ​ 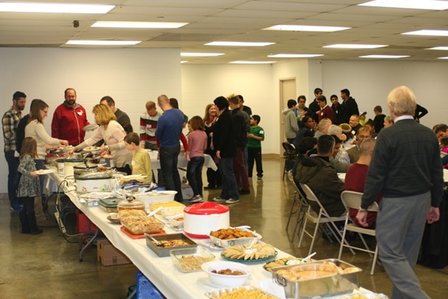 Dr. Martin Luther King, Jr. Day Multicultural Pitch-in Dinner January 2016
Each year we sponsor a celebration of Dr. Martin Luther King, Jr. Day. For the past 3 years, that celebration has taken the form of a multicultural pitch-in dinner.  Sixty people attended the first year's dinner (2014). In 2015, that number grew to 125.  This year we enjoyed the company of 180 people from at least 15 different countries. Our dinner was hosted by the Islamic Society of North America in Plainfield, who gave a wonderful tour of their facility after dinner. The variety of food and the diversity of fellowship and conversation was amazing! Our programs at these dinners are intentionally very brief--we want to allow plenty of time for people to get acquainted. This year's program featured a portion of Dr. King's "I Have A Dream" speech, delivered by 20 people each reciting one line of the speech, and ending with a recording of Dr. King. 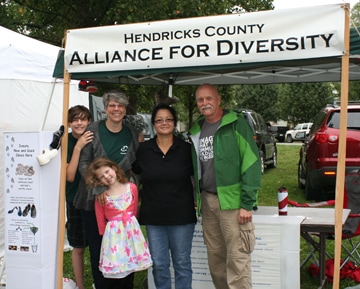 Quaker Day Festival September 19, 2015
The Hendricks County Alliance for Diversity was represented again at this year's Quaker Day Festival in Plainfield.  Each year we have a booth at this community event where we meet and talk with many people about our mission.  It's a great opportunity for people to become aware of the Alliance and for them to share their concerns and thoughts with us.
In addition to being there to promote the cause of diversity, we also use this opportunity to collect shoes for an organization called WaterStep.  WaterStep collects shoes in any condition and exports them to developing countries.  Shoes that are in good condition are re-sold, helping to strengthen struggling economies.  Shoes that are no longer usable as shoes are sold to recyclers so that the materials can be reused for other purposes.  The funds raised from this venture are used for water purification projects and associated education.
This year we collected the equivalent of 5 large trash bags full of shoes! 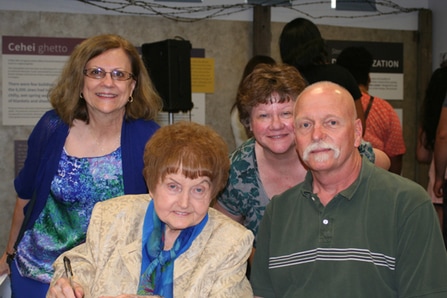 Hendricks County Alliance for Diversity participates in Holocaust Remembrance Day. Pictured left to right: Tammi Jessup, Auschwitz survivor and CANDLES founder Eva Kor, Deanna Carman and Sam Carman
Holocaust Remembrance Day at the CANDLES Holocaust Museum April, 2015
A small group from the Alliance for Diversity traveled to Terre Haute on April 18th for an observance of Holocaust Remembrance Day.  The event featured a talk by Auschwitz survivor and CANDLES Museum founder Eva Kor, as well as the premiere screening of a new film, "Rescue in the Philippines".  The documentary chronicles how five Cincinnati businessmen, together with Manuel Quezon (first president of the Philippines), former Indiana Governor Paul McNutt, and ambitious Army colonel Dwight Eisenhower helped 1,200 Jews escape the Nazis and immigrate to the Philippines.
CANDLES Holocaust Museum and Education Center honors and celebrates the lives of the 3,000 twins who were victims of Dr. Josef Mengele's deadly genetic experiments.  CANDLES is the only organization in the world dedicated to the memory of the twin victims and survivors of medical experimentation at Auschwitz. The museum and its programs honor and celebrate the lives of the Mengele Twins by telling their stories to educate the world and prevent similar atrocities. CANDLES is not only a witness to history but also an active voice outside the museum walls. By working to prevent genocide on a global level and transform prejudice on a local level, its goal is to create a world free from hatred and genocide. 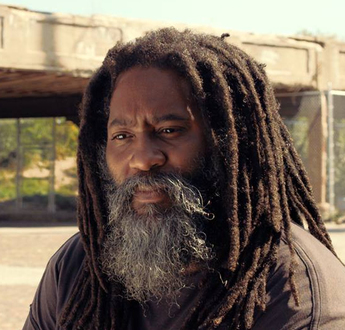 To better understand and serve the needs of the homeless community, Maurice Young lives among the homeless.
Cultural Competency Workshop in Brownsburg March, 2015
The Alliance for Diversity co-sponsored a Cultural Competency presentation on homelessness with presenter Maurice Young.  The presentation was held in Brownsburg on March 21st and was attended by 10 enthusiastic people.  It offered an opportunity for them to learn more about homelessness, and how to help those experiencing it.  After the presentation there was a screening of the short, award-winning documentary "The Advocate" about the work of Maurice Young who is an advocate for the homeless in Indianapolis. The film was written, directed, and produced by Taylor University students.
About the presenter: Maurice Young gave up a comfortable life.  With degrees from Xavier University in criminal justice, business administration, psychology and legal studies, and a 20 year career in the music industry, he could easily be living an affluent lifestyle. But his concern for a group of people who were desperately in need led him another direction. His decision to become an advocate for the homeless while living homelessly himself has come at a high cost, but is a decision he does not regret.  He believes his purpose in life is to help others.  In his own words, he has learned that “By having nothing to give, I have everything to give.” 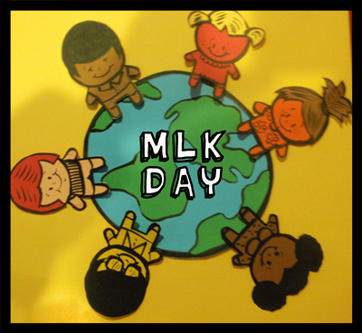 Attendees brought side dishes and desserts representative of their various cultures or heritages, making it a truly international feast.  Those attending were asked to place a push-pin in a map showing where they were born, the results of which were as follows: 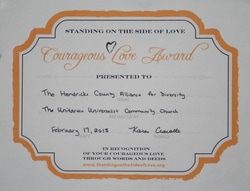 Hendricks County Alliance for Diversity Receives "Courageous Love" Award February, 2013
The Unitarian Universalist Community Church in Danville, Indiana recognized the Hendricks County Alliance for Diversity with the "Courageous Love" award.  Sponsored nationally by the "Standing on the Side of Love" campaign (www.standingonthesideoflove.org), this award was one of two presented this year in Indiana.  The award cited the many awareness-building activities that the Alliance has sponsored and organized, and recognized the Alliance for its work in building positive relationships within Hendricks County.  We are humbled and appreciative of this recognition.